Leon Acord will be awarding a $50 Amazon/BN GC to a randomly drawn winner via rafflecopter during the tour. 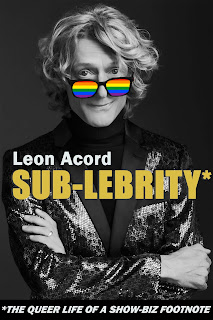 A droll, oddly inspirational memoir from the actor Breitbart once called "a gay leftist activist," SUB-LEBRITY by Leon Acord (Old Dogs & New Tricks) is an honest, sometimes bitchy but always sincere story about growing up (very) gay in rural Indiana, achieving acting success outside the closet, and generating headlines with his very-public smackdown with Trump-loving Susan Olsen (Cindy, The Brady Bunch)

This was a fun easy-to-read book. I think part of the reason for that is that each chapter was its own small story. Occasionally memoirs can seem to jump from place to place in a person’s life and yet I never felt it here.  I have no real way of knowing but it seemed open and honest. Someone letting us see a true look into their lives.

I am of course prejudiced about this book and not for any reason you might think. I love sarcasm. Unadulterated, hilarious sarcasm. I laughed out loud many times in this well-written book.

As far as I can tell, this man who has appeared in more than 35 films has never written a book until now. That makes him a man of many talents.

I’d never listened to “Two Chicks Talkin’ Politics” before.  But some friends had, and they urged me to reconsider.  Sheena was a big-hearted liberal, but she was also soft-spoken and new age-y.  Susan [Olsen] was a loud, rabid Trump fanatic.  I was walking into a trap, they warned.

While I felt confident I could hold my own, I shared my concerns with Sheena.  She promised she would moderate and not allow the discussion to de-evolve into a shouting match.  While it had at times been difficult to continue the show with Susan, she said, she had lots of practice dealing with her good friend.  Nonetheless, Sheena told me she expected me to “play nice.”

Before the show, I crammed on the facts like a pre-law student studying for the bar exam.

I arrived at the LA Talk Radio studios prepared and calm.  Sheena greeted me in the lobby.  She warned me Susan invited a friend – a fellow Trump fanatic – to appear on the show opposite me for “balance.”  Uh oh.  Instead of interviewing me about my thoughts on politics, they clearly wanted me to debate politics.

I suddenly felt like Rosie O’Donnell on her last day at The View.

Sheena walked me into the booth and introduced me to Susan’s friend.  We waited for Susan, who was dangerously close to being late.

Susan eventually rushed into the booth in a flurry, a fountain of apologies. Migraines had caused her to oversleep, she said – never mind that it was just shy of 5 p.m.  She didn’t hear her alarm because she’d been sleeping in a metal helmet that Larry King’s wife had given her.  Mrs. King guaranteed sleeping in the helmet would rid her of headaches, Susan explained – but it just wasn’t working!

As the “On Air” light switched on, I thought to myself, Cindy Brady is nuts. 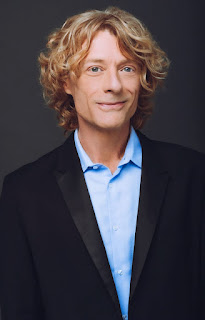 Leon Acord is an award-winning actor and writer who has appeared in over 35 films you've never seen and 30 plays you've never heard of. Possible exceptions include the digital TV series Old Dogs & New Tricks on Amazon Prime Video (which he created, wrote & co-produced), and the stage hit Carved in Stone (in which he played Quentin Crisp in both SF and LA productions). His memoir, SUB-LEBRITY: The Queer Life of a Show-Biz Footnote, is now available in paperback & e-book on Amazon. He wrote his one-man show Last Sunday in June (1996) and co-authored the 2014 play Setting the Record Gay. He was a "Take Five" columnist for Back Stage West throughout 2009 and a former contributor to Huffington Post. He has also written for San Francisco Examiner and the journal Human Prospect. He currently lives in West LA with husband Laurence Whiting & their cat Toby.