This post is part of a virtual book tour organized by Goddess Fish Promotions. Bob Liter will be awarding a $50 Amazon/BN GC to a randomly drawn winner via rafflecopter during the tour. 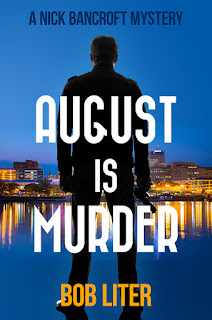 IN THIS "GRIPPING" MYSTERY THRILLER SOMEONE TRIES TO BURN NICK BANCROFT ALIVE, BEATS HIM SENSELESS, USES HIM FOR TARGET PRACTICE AND WORST OF ALL HIS BELOVED CHICAGO CUBS DISAPPOINT HIM AGAIN! SOMETIMES A PI JUST CAN'T CATCH A BREAK! BUT WHEN HIS CLIENT IS A SEXY NUDIST, NICK BANCROFT WILL PUT UP WITH JUST ABOUT ANYTHING!

When a sexy nudist hires him to protect her from whoever is threatening her life, Nick Bancroft becomes the target. Someone tries to burn him alive, beats the hell out of him and, since that didn't run him off, uses him for target practice. Meanwhile, two people are murdered, Nick's true love, Maggie Atley, is more than somewhat perturbed by his relationship with his client, and a mysterious club seems to hold the answer. Nick survives an exciting but still losing season by his beloved Chicago Cubs, a vicious attack by a couple of huge dogs and eventually puts the finger on the bad guys.

This is my kind of P.I. In fact Nick Bancroft is almost a “black noir” kind of guy. Yet somehow Bob Liter has made him have that patina and yet still placed him in a modern-day story. It all rolls into a good blend for a good story. It’s an easy quick read with some quirky characters everyone will no doubt enjoy.

I will say this about its genre classification. I don’t think it’s really a romance. I think it’s a mystery. There is some mention of nudity and a joke or two.  There’s even some talk from Nick’s POV about going to bed with somebody. However, there is nothing steamy and nothing embarrassing about it. This in my opinion made it an even better story. We all have our own things. Romance is just not one of my favorite genres.

There are 5 books in this great series titled “Nick Bancroft Mysteries”. Hope he keeps writing more.

The first time they tried to kill me I was asleep. My office and apartment were on the third floor of a nearly abandoned building. My own coughing jarred me awake. I rolled to a sitting position from the sweat-wet bedding and continued choking on hot, acrid air. The sweat was no surprise. My air conditioner had quit. But this was more than August heat in Centrel City, Illinois.

A flip of the light switch near my bed did nothing to alleviate the darkness. I went to hands and knees and felt around until I found my pants and shoes, sat against the bed, squirmed into the jeans. Heat from the floor threatened to roast my rump.

"Don't panic, Nick," I said aloud. Should I try to save anything or just get the hell out? My files, I had to save my case files. I crawled into the office, stood, and pulled out the top drawer. I felt my way to the office door and opened it. A swish of even hotter air swept against my face.

What about Maggie? She might be in the office on the second floor. It was well past midnight. Why would she be there? I assured myself she was not. She was the reason why I now had a stray cat and a cracked heart. What about the cat? Any cat that came and went when the office door was locked wouldn't be trapped in that old building.

Robert T “Bob” Liter (1923-2008) was born in Hartley, IA to Charles and Hazel Liter and grew up in Des Moines, IA.  His sisters June and JoAnn, joined the family before the decade was over. Bob was a U.S. Navy veteran, and was honorably discharged after two tours of duty, one tour in World War II and the other tour in the Korean War. A Graduate from Drake University in Des Moines, IA, he earned his degree in journalism, and married Lillian in 1950.

I came along 9 months later; my name is Martie. I was soon followed by my sister Jeannie and two brothers, Jeff and Ron.

Later in Dad's journalism career he worked as a copy editor for the Peoria Journal Star, Peoria, IL until his retirement. Through the years he was also a writer. Early in his sideline career he was published in various True Confession magazines. When Dad retired to take care of Mom he continued to pursue his passion for writing. Much of his work has been available since 2002 in EBook format.

It is my honor to introduce new readers to the Bancroft Mysteries where the character Nick Bancroft has an uncanny resemblance to my Dad, Bob Liter with his wit and bodacious gutsy approach to life.  Then there is Nick’s on-again off-again lady, Maggie Atley, who is just like Mom, Lillian Liter, in the way she deals with a self-proclaimed “male chauvinist piggy.”

While Nick solves mysteries in the fictitious, but very real, community of Central City, IL he still finds time for his love-hate relationship with bowling, and his avid undying passion for the Chicago Cubs and Bears.

Author Page on Amazon: http://www.bit.ly/BobLiter (This sends a reader to where all the Buy Links Are)

I especially appreciate your review and praise of my dad's work collectively called Bancroft Mysteries.

Nick Bancroft, an investigative reporter, solves mysteries in Centrel City, IL. Even with all the complications and dangers of sleuthing, Nick finds time for bowling, his undying passion for the Chicago Cubs and Bears, and his on-again-off-again affair with Maggie.

The stories take place in a fictitious community based on Peoria, IL, where Bob Liter, in real life, was a copyeditor for the P.J. Star. Published originally as EBooks, a few years before Dad passed in 2008, they are for the first time available in paperback and audiobook format on Amazon.

I discovered how much Dad put of himself into the stories. His protagonist, Nick, through his adventures, schemes, and sometimes chauvinistic behavior, has given me a profound appreciation for my dad. By writing sequels, I hope to keep his legacy fresh and leave my own. My name is Martie Liter Ogborn.

The sixth book in the series introduces Nick's niece, J.B. Bancroft, is scheduled for release at the end of this year. "Murder Inherited," builds from the first five books, is a murder mystery sprinkled with romance and familiar favorite characters.

I hope YOU enjoy the series. Thank you.

Rita, thanks for following the virtual book tour. Good Luck

Great review. Thanks for sharing!

Thank you so much for taking time to bring to our attention another great read. I enjoy these tours and finding out about many terrific books.

Thanks for sharing! Sounds great!