This post is part of a virtual book tour organized by Goddess Fish Promotions. Jo Cassie McRae will be awarding a $50 Amazon or Barnes and Noble GC to a randomly drawn winner via rafflecopter during the tour. Click on the tour banner to see the other stops on the tour. 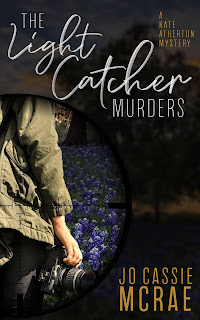 Kate once enjoyed a long, successful career with a specialized, highly secret federal intelligence agency. Crises in both her personal and professional life drove her to early retirement and, ultimately, to Wheaton Creek, the perfect place for her and her former-military husband to escape what had come to feel like a world made up of wars, hatred, fear, and untimely death. And, at first, the escape was all Kate had hoped for. Then murder came to Wheaton Creek—a crime that a corrupt county sheriff seems determined to pin on Kate’s photographer friend, Lucy Celek.

Lucy’s work has been chosen to appear at a prestigious photography festival, a festival that could take her from amateur to professional standing. All goes well until the gallery displaying her work is broken into, and one of Lucy’s photographs is vandalized. A week later, the man Lucy suspected of destroying her photograph—a fellow photographer who was angry that his own work was not chosen by the festival committee—is murdered. Faced with a sheriff who shows little interest in expanding his list of suspects beyond Lucy, Kate feels she must dust off her puzzle-solving skills to find the real killer. Murder is just the beginning, though, as Kate’s amateur sleuthing begins to reveal a tangled web of crimes that go beyond anything she could have imagined.

I thought this book was a little slow in the beginning. But it seemed to pick up fast and then just roll right on through to the end in a particularly good way. What I thought was going to be a light cozy, turned out to be a lot more than that. Don’t get me wrong. This isn’t a heavy deep story and it is not full of blood and gore. However, Jo Cassie McRae put a spin on this that made it quite different than your everyday cozy. Yes, the town has a neat name. Yes, the characters are varied and interesting, there is even a deputy in the mix but...there are hints all through this story that there just might be more than meets the eye.

Aside from the undercurrent always keeping you wondering a little bit, I loved the way the author varied her characters. There’s a young computer guy (sorry don’t know today’s socially acceptable name for nerd). There are artists, professionals, retired people. Each of which has his or her own interesting spot in the story. Most importantly to me was a character named Kate Atherton, the series title of the book. Kate is retired, quiet, well not really, and laid back, well not really. I liked her a lot. She’s the calm in the storm. Smart, strong, and cheeky.

It looks as if this is Book 1 in a series titled “Kate Atherton Mysteries”. I most certainly hope there will be a book 2.

Picking her way through the broken glass again, Kate slipped up behind Lucy. She gave the beleaguered deputy a sympathetic smile and gently took hold of Lucy’s elbow. “Lucy, dear. Do you think you might want to calm down? This officer is going to do his best to find out who did this and why. He isn’t the bad guy here.”

Lucy wheeled on her. “He doesn’t have to look far to find out who did this. If he’d just listen to me and quit asking irrelevant questions! I’ve been telling him that it has to be Stewart Wilson. You saw how Stewart behaved after the festival. He’s a horrible, angry, vindictive man! Did you see how he ripped into my mural? The bastard! If I could get my hands on him, I swear I’d rip into him the same way!”

The deputy’s eyebrows shot up, and he shifted uneasily, his pen hovering over his notepad. Kate’s grip on Lucy’s elbow tightened, as did the smile she showed the deputy. “I’m sure Ms. Celek didn’t mean that, Deputy Green,” she said. When Lucy started to disagree, Kate squeezed her arm so tightly that Lucy let out a little yelp of pain. “She’s understandably distraught. If you have more questions for her, might I suggest that you give her some time to collect herself? I’m sure she’ll be more helpful when she’s feeling a bit more rational.”

“Rational?” Lucy flinched again under the renewed fierceness of Kate’s grip and did not finish what she had been about to say.

About the Author: Jo Cassie McRae is a native Texan who has lived near Austin on the edge of the Texas Hill country for over 30 years. In addition to writing, McRae loves to read, garden, and cook. Like Kate Atherton (The Light Catcher Murders), McRae’s bookshelves overflow with history books, biographies, historical fiction, and mystery novels. Unlike Kate, McRae does not have a mysterious, secret former career, having worked instead as a rather ordinary legal assistant at an Austin law firm.