This post is part of a virtual book tour organized by Goddess Fish Promotions. Meredith Egan will be awarding a $20 Amazon/BN GC to a randomly drawn winner via rafflecopter during the tour. 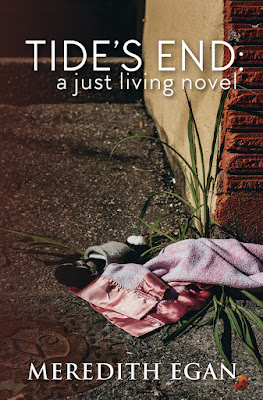 Taylor Smythe dreams of having a loving family. But first, he has to rescue his little sister Jenny from the gritty underbelly of the child cyberporn industry. Taylor journeys from homelessness in the inner city to a community in the dripping forests of the Pacific Northwest to confront the relentless pounding of his fiercest pain. Can he become the big brother Jenny needs right now, and for the rest of their lives? Tide’s End explores the many faces of sexual assault and human trafficking, and how life can shatter for those most affected – the victims. Because #MeToo is more common than we can imagine. As is #ChildrenToo and even #BoysToo. It tears apart our families and neighbourhoods. And wherever there is suffering, there are guardians and helpers who still the relentless pounding to encourage Tide’s End.

This was a hard book to read. Not because of it’s construction but because of its subject. Sexual assault and human trafficking are subjects that I think we tend to only see in tv shows and movies. This book most certainly made it seem more real. In fact, this book was written well enough that it began to seem like a movie. As if you could unfortunately see some of the scenes.

I did think  this was a long book. Normally that is not something that occurs to me. I don’t think it moved slow but maybe was rather a difficult subject to read about be it fact or fiction. 400+ pages is in my opinion pushing it to compose a good story and keep the reader’s attention at the same time. Maybe my attention span was the problem :) Nonetheless, I am glad I read it.

“Welcome, everyone. I’m Rosie, and I’m honoured to be here today,” she said, and she waved the long stick she was holding, getting us to stand. It had a carving of a big, black bird on the top and was painted bright colours. There was a large crystal in it, and some feathers fluttered from a ribbon. I liked it, I decided.

“Let’s start this evening in a good way, with a prayer,” she said. A prayer? Weird.

“Thank you, Creator, for bringing us together tonight. Thank you for the journeys that brought us here, especially the good bits.” She asked for kindness on our “healing journey,” and open hearts and minds and other stuff. Then she said something I won’t forget.

“Creator, we ask you to remind us to believe each other as much as we want to be believed. And to show us new ways to make sense of what happened to us. Help us find a way to go back into the world with less hurting.” Less hurting. An idea I could get behind.

“Let’s be open to new things, and not be too judgemental.” She just stood there for a bit, and when she finally sat, so did everybody else. People were smiling, even me.

“Tide’s End. I don’t know if you know why this place is named that, so I’ll try to explain.

“Mission – the train bridge, actually – is the place where the folks who regulate fishing have decided the tides end. The water is brackish until here, up the river delta, but First Nations People have been fishing here since time…forever.  At least 10,000 years. We fished the salmon, and the sturgeon, and other fish. And we know about tides, and how they pound and beat on a place. Without ending.

“So, we called this place Tide’s End because we hope to help with the relentless pounding.” She adjusted her skirt and looked at us again.

“We’ll talk about Taylor’s participating later, but for now, know that sometimes we are going to push you. Ask you to work hard. But you can always say no, if you need to. We just don’t want you to be disruptive…stopping someone else from getting what they need in the circle.” She smiled and handed the talking stick to Kate.

Meredith Egan is an author of critically acclaimed novels, Just Living: a novel and Tide’s End: A Just Living novel. The stories are shaped from her work with crime victims and violent prisoners over more than thirty years. Meredith is trained in mediation and peacemaking circles., and has been honoured to learn from many First Nations peoples. Meredith coaches writers and other creative folks and offers workshops and training through her Daring Imagination work.

Meredith is the principal at Wild Goat Executive Coaching where her clients include leaders in the automotive, technology, government and small business fields. She lives at the Groundswell Ecovillage in beautiful Yarrow, BC. with her dog Mollie, and rambunctious feline sisters Firefly and Filigree. For fun she dabbles in cooking soup for her neighbours, and soaking in her hot tub with her four adult children when they visit.

You can find Meredith through her website, and on Facebook and Twitter for information about her novels, and her coaching work. Meredith welcomes opportunities to speak with groups about justice, and writing. Her books are available through Amazon and local bookstores.