Sherlock Holmes and the Remaining Improbable

This post is part of a virtual book tour organized by Goddess Fish Promotions.  Susanne M. Dutton will be awarding a $75 Amazon/BN GC to a randomly drawn winner via rafflecopter during the tour.

The game is not afoot. The Better-Every-Day world of 1895 is gone, even hard to recall as WWI ends. From his rural cottage, Holmes no longer provokes Scotland Yard’s envy or his landlady’s impatience, but neither is he content with the study of bees. August 1920 finds him filling out entry papers at a nearly defunct psychiatric clinic on the Normandy coast. England’s new Dangerous Drugs Act declares his cocaine use illegal and he aims to quit entirely... Confronted by a question as to his “treatment goal,” Holmes hesitates, aware that his real goal far exceeds the capacity of any clinic. His scribbled response, “no more solutions, but one true resolution,” seems more a vow than a goal to his psychiatrist, Pierre Joubert. The doctor is right. Like a tiny explosion unaccountably shifting a far-reaching landscape, the simple words churn desperate action and interlocking mystery into the lives of Holmes’ friends and enemies both.

I am/was a huge fan of Sherlock Holmes as a kid. The intelligent, well-trained, miracle man. The odd, peculiar man. I suppose this picture of a drug-ridden old man rubbed against the grain with me in the first place. But in Conan Doyle’s later books there is mention of Watson being concerned about Holmes continued use. Ideally begun as a treatment as a young child. Doyle did grow up with an alcoholic father so possibly this influenced his writing.

Think all of this sounds like a psychological dissertation? Well it isn’t, and it doesn’t read that way. It is an interesting view and a huge imagination into the aging life of an almost human-like character. Susanne Dutton seems to almost live this story, and she makes we readers do the same. A little strange (not Dr. Strangelove like strange) well-written and a good read. 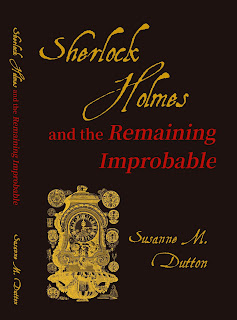 It’s clear, Watson, that you have come to trust this man, never mind your fancy knot work.” He let a hand rest briefly on Joubert’s shoulder, and then snatched it away. “The charade you two gentleman have just now performed causes me to question myself. You are evidently in collusion.”

I said, “We were that obvious?”

“I’m afraid so,” Holmes said. “In fact, when I have time, I will publish a monograph on what I will call ‘body language.’ Today’s performance will serve as a prime example. I watched you usher this Frenchman across the cottage—your hesitation, your caution lest you cause him the least pain, was evident. Your care was exactly as you would grant a lifelong patient going through a complicated procedure. You watched his every backward step, lest he trip. I noted the commiserating tilt of your head—and the lines of concern on your brow. Without a single word, you managed to signal your sympathy. To sum up, between the gun and the man you pointed it at, I detected at least a hundred yards worth of high-grade Watsonian scruple.

Holmes glared down at the top of Joubert’s head. “No doubt the entire Punch and Judy was your conception, Pierre, but you could not hide your concern for Watson, how you sought to assure him that it was all for a worthy purpose. Indeed, I saw you shudder and sweat, but you were in no fear for your life—in no dread of John Watson, at least. I submit to you both, that what I have witnessed just now was more a dance than an arrest.” 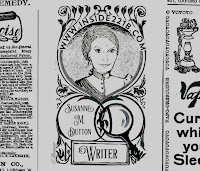 Susanne Dutton is the one who hid during high school gym, produced an alternative newspaper and exchanged notes in Tolkien’s Elfish language with her few friends. While earning her B.A. in English, she drove a shabby Ford Falcon with a changing array of homemade bumper strips:  Art for Art’s Sake, Forgive Us Our Trespasses, Free Bosie from the Scorn of History. Later, her interests in myth and depth psychology led to graduate and postgraduate degrees in counseling.

Nowadays, having outlived her mortgage and her professional counseling life, she aims herself at her desk most days; where she tangles with whatever story she can’t get out of her head. Those stories tend to seat readers within pinching distance of her characters, who, like most of us, slide at times from real life to fantasy and back. A man with Alzheimer’s sets out alone for his childhood home. A girl realizes she’s happier throwing away her meals than eating them.  A woman burgles her neighbors in order to stay in the neighborhood.

Born in Des Moines, Iowa, Susanne grew up in the SF Bay Area, has two grown children, and lives with her husband in an old Philadelphia house, built of the stones dug from the ground where it sits.