Dead as a Duck

This post is part of a book tour organized by Goddess Fish Promotions. Colleen J. Shogan will be awarding a $50 Amazon/BN GC to a randomly drawn winner via rafflecopter during the tour.

Congressional staffer Kit Marshall is looking forward to a much-deserved summer vacation in the Outer Banks. When the mayor of the beach town turns up dead, Kit and her friends need to put their fun and relaxation on hold to help solve the crime.

I have read and reviewed several of the books in this series. If you could look back at my reviews, you would see that I enjoyed the books and yet there were a few quirks I wasn’t crazy about. Oddly enough (or not) Kit and her friends have grown as the book numbers grew. In the first couple of books I was occasionally frustrated. It seemed there was way too much talk about which clothes Kit and her friend would wear. I suppose I’m not a fashion person. But as the books progressed Shogan seemed to make her characters grow. Develop them as young people would grow. They had more depth and frankly it gave more to the stories. That has happened here again.

Taking Kit out of Washington with her boss, Congresswoman Maeve Dixon, sets this particular political cozy in a whole new light. We’re not just in the confines of the Senate hallways or the Library of Congress. The possibilities to add to this cute cozy are much greater and Colleen Shogan takes advantage of it. We have well-known characters we’ve grown up with in a new setting.

Makes for a fun and interesting book. Having read several of the books in this series I know you do not have to read this series in order and each book can be read as a stand-alone. However, as I have said,  the characters (or the author) grow better and better, so I suggest you start with Book 1.

There are 6 books in this series, so you have a lot to read. Get busy.

Before I could answer, Tobias spoke up. “The mayor got clobbered, at least politically speaking. It was a real mess. Lots of people were yelling, including her brother.” He pointed at me again.

Gomez turned to me. “Is your brother still in town?”

“Yes, we’re on vacation together. We’ve rented a beach house in Duck for the week,” I said.

“Sebastian is my significant other,” said Lisa. “That’s how Kit and I know each other.”

Gomez chewed on the end of her pen. “That’s enough for now. Wait over there until I tell you otherwise.”

We walked back to our original location. “If Ronan was murdered, it probably happened sometime last night, don’t you think?”

“The medical examiner should be able to figure that out,” she said. “But yes, I would assume that would be the case. There’s a lot of people on this boardwalk when the restaurants and businesses are open. If someone tossed a body into the sound, someone would notice.”

“Then we don’t have anything to worry about.” I sighed in deep relief. “If it happened in the middle of the night, you can serve as Sebastian’s alibi.”

Lisa shifted from one foot to the other. “That’s going to be a problem.”

“What do you mean, Lisa?” I asked in a shaky voice.

“I woke up in the middle of the night and Sebastian wasn’t there,” said Lisa. “I don’t know where he went, but he wasn’t with me.” 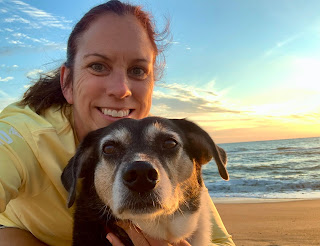 Colleen is a member of Sisters in Crime. "Stabbing in the Senate" was awarded the Next Generation Indie prize for Best Mystery in 2016. "Homicide in the House" was a 2017 finalist for the RONE Award for Best Mystery. “Calamity at the Continental Club” was a 2018 finalist in the “best cozy mystery” at Killer Nashville. She splits her time between Arlington, Virginia and Duck, NC in the Outer Banks with her husband Rob and beagle mutt Conan.

What inspired you to write this book? It really sounds good!
digicats {at} sbcglobal {dot} net

Thank you for reviewing my book!

I spend a lot of time in the Outer Banks and I really wanted to try it out as a setting for the next installation in my series.

I enjoyed it. Write more!

Colleen J. Shogan is a favorite author of mine. I love reading all her books. The "Washington Whodunit" book series is so good!

Thank you for sharing your review and the book and author details, this sounds like an excellent read

Thanks for sharing your review thoughts.