She's the One Who Thinks Too Much

S. R.Cronin will be awarding a $25 Amazon/BN GC to a randomly drawn winner via rafflecopter during the tour. 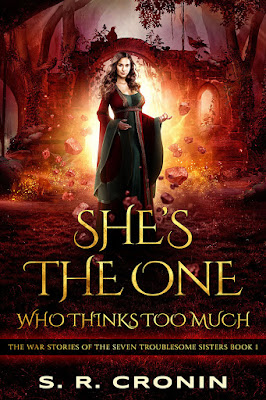 It’s the 1200’s, and the small realm of Ilari has had peace and prosperity for generations. That doesn’t mean everyone is happy, however.

Ryalgar, a spinster farm girl and the oldest of seven, has always preferred her studies to flirtation, yet even she finally meets her prince. Or so she thinks, until she discovers he’s already betrothed. Embarrassed, she flees her family’s farm to join the Velka, the mysterious women of the forest known for their magical powers and for living apart from men.

As a Velka, she develops her telekinesis and learns she has a talent for analyzing information. Both are going to come in handy. For she’s continued to meet her prince at the forest’s edge, thinking being his mistress isn’t such a bad deal. Then she learns more about his princely assignment. He’s tasked with training the army of Ilari to repel the feared Mongol horseman who’ve been moving eastward for years, killing all in their path. And, her prince is willing to sacrifice the outer farmlands where she grew up to these invaders, if he has to.

Ryalgar isn’t about to let that happen.

She’s got the Velka behind her now, as well as a multitude of university intellectuals, a family of tough farmers, and six sisters each with her own unique personality and talents.

Can Ryalgar organize all that into a resistance that will stop the Mongols? She thinks she can.

I wasn’t sure what to expect as I pushed my way through several feet of dense underbrush complicated by tangled vines adorned with tiny sharp thorns. It got so hard to move forward I considered giving up. Had I misunderstood Aliz’s instruction on where to enter? Then, I saw a person waiting for me on the far side of a nearby group of bushes. I pushed my way towards her.

“Sorry this is so difficult. Ilari considers this all it open forest, so we’re forbidden from putting up fences or gates. We keep the perimeter as overgrown as we can to discourage intruders.”

The woman who spoke to me was at least ten years older than me. She was slender and fit, and she wore men’s clothing, trousers, and boots. “I’m a guide,” she said. She handed me the reins to an animal hidden by the shrubbery. “Hop on. Small, slow animals do better in here.”

I looked at what I was about to mount. “A donkey?”

“We use them exclusively. I know you’ll miss your horse, but trust me, she wouldn’t be happy in here. ”

I shrugged and got on, noticing a narrow path through the overgrown shrubbery.

It wasn’t until the animal began to move that it happened. The dense vegetation and the thick overhanging trees seemed to grow closer until it felt like the branches were reaching out to touch me. I shivered and drew myself in tighter. Then, out of nowhere, I couldn’t breathe.

“I’m sorry. I have to stop.” I felt silly as I dismounted and squatted on the ground, gasping for air. “I don’t know what’s wrong with me.”

“Take your time,” she said. “It happens to a lot of women at first, but you ladies from the open fields of Vinx seem to have the worst of it.

I looked around at the cloying green tendrils everywhere and closed my eyes, doing my best to imagine the sky.

“There are places in the forest that are more open,” she assured me. “Only the edges are this bad. Come on. You’ll see.”

After riding for a while, I realized she’d been right. Deep in the forest, the trees were larger and their branches were higher off the ground. The heavy shade made for fewer shrubs, and far less thorny vines. Even though the sky was still barely visible through the branches, I could see several feet ahead. It helped.

We rounded a corner into a large open space, cleared to hold a massive stone building far larger than any barn in Vinx. The giant trees near it must have been ancient, as their branches started well above the roof and reached out to barely touch each other in the middle of the clearing. I could glimpse the sky around their leaves.

“It’s our main lodge and your new home. Welcome.” 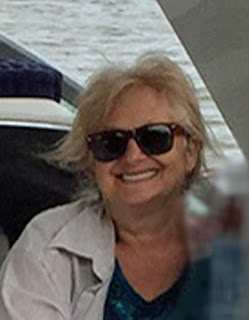 NOTE: here is the Amazon link for the book: https://www.amazon.com/dp/B08BY4RLX1

Your book sounds like a great read and thank you for sharing it with us.

Thanks for having me on your blog today.

I enjoyed the excerpt, thanks for sharing

New author for me.

An intriguing synopsis and excerpt, this sounds like a great read. Thank you for sharing the book and author details