This post is part of a book tour organized by Goddess Fish Promotions. Ian Williams will be awarding a $50 Amazon/BN GC to a randomly drawn winner via rafflecopter during the tour.

In The Clockmaker’s Tale: and other stories, Ian Williams takes us to the near future and beyond. From a moon base where androids conduct experiments on human test subjects, to futuristic tours of the ocean depths that hide a terrible secret... 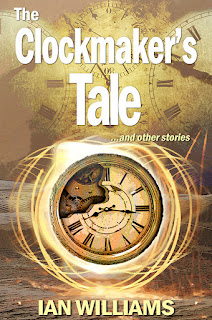 ...from a society governed by harsh rule of law that is enforced by AI, to a humble clockmaker tempted by the promise of increased productivity through technological augmentation.

Covering issues such as environmental decay, the end of facts and proven truths, our growing waste problem, and humanity’s tendency to divide when we should come together, this collection of six science fiction stories relates as much to our time as it does to the many possible futures.

Returning to his briefcase, Alexander produced a card from an outside pocket. “Here,” he said, holding it between two of his fingers.

George took it and looked it over, now realising there was a sales pitch to follow. He’s better at this than I am, he had to admit. At the top of the textured card was the name of a company he was certain he knew but couldn’t quite place. “ACC?”

“Adaptive Cognition and Cybernetics. We specialise in cutting-edge, next-generation, technology. Our latest product was made for people just like you, who need more hours in a day than the good Lord provides.”

I left my work for this? George was less than impressed. “Thank you, but I...”

“Before you say no, how about I show you what I’m talking about?” Alexander picked up his briefcase and walked to the counter, where he placed it down and clicked open the catches. He kept his back turned until he was ready to present his product.

When he turned, George was immediately drawn forward, to inspect the object himself. He was fascinated by the curved design. It had a snowy-white casing, with delicately printed calligraphy underlined by a sweeping blue line, and a tiny, built-in, LED screen. It appeared as well-made as any of his clocks. Such a high degree of engineering, yet it remained a simple-looking thing.

“This,” Alexander said, not quite ready to hand over the device, “is our latest model. It’s called a Work Buddy.” 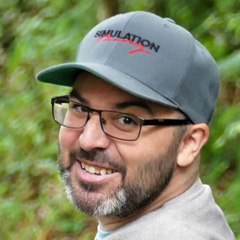 Ian Williams is a Science Fiction writer from the UK. He lives in a small town not far from
London. Ian had a short career in the UK Court Service but was forced to quit that job when his medical condition worsened. Now, from the comfort of his wheelchair, he writes the stories he has always wanted to read. His writing spans lightyears of space, to near-future Earths; from small changes to society, to entirely new civilisations.

This book is special to me because it was written to make a point. Each story included in The Clockmaker’s Tale: and other stories says something about the world we currently inhabit. They serve as a warning to all. If we ignore our problems now, it will be future generations that suffer. And, as I’m sure we are all aware, the most pressing issue we face today is that of Climate Change.

The story Post-Truth Tours also addresses two of the most disturbing challenges we face as a society, that of mistruths and misinformation. We now live in a world where an expert’s assessment of a situation can be considered equal to that of an individual with no training or qualification in the same subject. Until we see precisely how dangerous a thing this is, we will unfortunately repeat our mistakes.

I wanted to tell my side of how I see our current state as a society. That is the reason why the worlds within these stories may seem familiar, even when things appear different. The best example of this is the story Waste Not, in which people live in a land overwhelmed by trash and detritus. It may seem strange, until you know what happens to most of the waste we produce.

I would love to give you some detailed answer for this question, but the truth is I don’t entirely know. Some have come out of the blue, like a strike of lightening. These may be fully formed plots or just a single idea. Others have been influenced by something I may have read about, such as a new theory or discovery. One or two even came from dreams. My first book, called Transitory, started life as a strange moment within a dream where I saw myself being murdered.

As for The Clockmaker’s Tale: and other stories, these stories all came from my frustrations with humanity and how, if we don’t get a move on, our problems will inevitably destroy us. We can’t afford to keep missing environmental targets or ignore our tendency to turn against others in hard times (especially when there may not be many of us left, as in the story Last Bus to Freedom).

In some respect it was more difficult, but also a little easier in some places. I found the initial ideas were harder to pin down from the first angry rants they stemmed from. It wasn’t good enough to just tell readers my thoughts, I had to find the correct narrative to merge them with. The characters had to be meticulously designed and planned out so that they could make my point for me. That is why in some of these stories the protagonist may hold some odd beliefs.

There are three genres that I usually gravitate towards, and they are Mystery/Thriller, Horror, and my main choice of Science Fiction. A good eighty percent of my writing is within the Sci-Fi genre. It is the genre that I feel most comfortable with. Also, I would argue it is the one with the greatest scope too. You can write about a single person or an entire galaxy if you wish. It is almost infinite.

I have two places where I most like to write. My main base is at my computer, currently situated in my kitchen. Hanging from the wall in front of me is a picture of a small Cornish town called Polperro. When my mind wanders, and I temporarily lose concentration, it often revisits that town.

The second place I like to write in is the garden. Give me a sunny day, a cold drink, and my laptop and I’ll give you my best work. That, for me, is writing heaven!

My father has always been a book-a-holic. Throughout my childhood we were surrounded by books; books on the kitchen table, books in the lounge, books, books, books. There was even a time when my father would have books sent to him through a monthly book subscription service. Usually Stephen King novels, these hardback beauties would arrive in a big box ready to read and display (which he still does now, with pride, and a few more books than before).

I remember vividly watching my father opening these boxes of written treats and feeling a huge sense of awe. The dust covers were always adorned with colourful images—sometimes terrifying for my young mind—that made me want to dive right in. I wanted to own them all. I also began imagining my own name upon them.

This was the spark that ignited my love for storytelling. That I am here writing about my own book is something I will never lose love for.

What types of books do you enjoy to read?

Enjoyed having you here. Best of luck with your book.

All types of books interest me, but more recently I enjoyed reading Andy Weir’s Project Hail Mary. I often read thrillers when I’m not reading Sci-Fi, or the occasional horror. Those are the genres I tend to read. Thanks for the question Kimberly!

Thanks for sharing an excerpt an author interview! The book sounds interesting and I am digging the book cover!