Claudia J. Severin will be awarding a $20 Amazon or Barnes and Noble GC to a randomly drawn winner via rafflecopter during the tour. 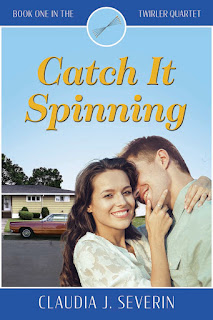 Yvonne Edison thought she was so lucky, dating a hunky high school football hero. She was proud to be wearing Dick Dunn’s class of 1968 ring. She thought their future was college, marriage, and a family together. Dick thought his future was adding her V-card to his growing collection before moving on to corrupting college coeds.

She supposed all innocent girls had rude awakenings. New-boy-in-town Randy Sparks made her forget her unfaithful first sweetheart. Well, almost. But did Randy adore her or was he more enamored with playing basketball and fighter plane games?

Daniel Adams knew Yvonne only saw him as the boy next door. His twin sister, Debbie, was her best friend so Yvonne always tolerated him growing up. But one day he realized she had morphed into a stellar beauty and had his pulse racing and boys flocking around her. By the time he was old enough to get a part-time job and buy his own set of wheels, he worried that she may be permanently attached to some other fool...

Yvonne sampled a variety of boys: the jock, the party animal, the hippie, the poet. But she wasn’t finding true love like her baton-twirler girlfriends. Was it because she’d kept her boyfriends wanting more like a good girl? Or had she craved control too much to let anyone get so intimate?

Fast forward to ten years later, when a medical problem threatened her perfectly manicured marriage. There was a treatment for her malady, but as her husband discovered, it may have been worse than the disease. The serious side effects threatened their relationship, and her happiness kept spinning out of reach just like that baton she once tried to master. She would need all of his love and support to grab on tightly.

Catch it Spinning is the first of the Twirler Quartet. The turbulent late 1960s and early 1970s provide the social unrest that simmers in the background even in a sleepy Midwestern city.

I must admit that one reason I probably enjoyed this book was because I am of an age that I can relate to the time period. However, I think anyone of any age can relate to the problems, the social situations, social pressures, etc. This genre, romance, is not my favorite reading. But somehow the story cuts so closely to many things most all of us experienced that I think the romance part flew by me. This is full of those characters we admired when we were young, those we wanted to be, and those we absolutely hated back then too. This is definitely at least what I would call a New Adult or college age book. A well-written one and a nice read.

Yvonne walked around Four Star Drugstore, pretending to look at gifts and greeting cards when she wanted to bolt out the door. She hugged herself mostly to keep her hands from shaking. I shouldn’t have come here, too many people I know shop here. A glance at the pharmacist assured her he was working earnestly.

Oh no. The last person who can find me here. She looked up into Daniel’s face, cringing.

“I didn’t know you were heading here. My dad’s sick at home, but still thinks he needs his smokes. He figured since I am eighteen now, I can buy them.”

“You can’t be here now. You must leave before anyone sees you. Or sees us together.” Yvonne pulled her long hair toward her face, as though it could curtain her.

“What? What’s gotten into you? It isn’t a secret we  are dating.”

“Shhhh. Don’t say that here. Go outside until I leave.” She made shooing motions with her hands, while he frowned and shook his head.

“Yvonne Edison, prescription is ready,” the pharmacist called over a loudspeaker.

Daniel squinted at her, as she was still motioning for him to leave. He went outside and stood in front of the drugstore.

Yvonne charged the prescription to her parents’ account and walked outside. Daniel stood right by the door, but she hurried to get into the driver’s side of her father’s Pontiac. He got in on the passenger side.

“Do you mind telling me what that was all about?”

Yvonne sighed. She opened the prescription sack and pulled out a plastic disc container and handed it to him.

His expression was blank. “What is this?” 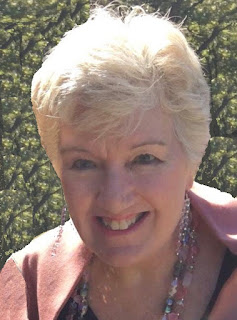 Claudia Johnson Severin lives on a farm in southeast Nebraska. She grew up in Lincoln, Nebraska, in the Eastridge neighborhood. She went back to her high school twirler days for this series. Like her main characters, she found hours of practice together developed friendships which led to many adventures outside of school.

Like Yvonne, she graduated from the University of Nebraska with a journalism degree. She also worked at Lincoln Telephone Company. The infertility storyline is based loosely on the experience of college friends.

This is the first of the Twirler Quartet series. She previously wrote Her Side of History—Finding My Foremothers’ Footprints, an anthology of historical fiction about four of her family’s female ancestors.

Writing about past decades gives her a chance to rewrite history and gives the characters a chance to benefit from lessons learned in the time since. She loved the 1960s, but wouldn’t trade her smartphone for a teen line or her SUV for her old Volkswagen Beetle.