Beth M. Caruso will be awarding a $25 Amazon or Barnes and Noble GC to a randomly drawn winner via rafflecopter during the tour. 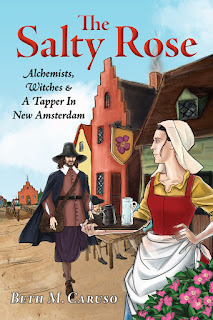 As the lives of Marie and John become intertwined through friendship and trade, a search for justice of a Dutch woman accused of witchcraft in Hartford puts them on a collision course affecting not only their own destinies but also the fate of colonial America...

“Marie. Enough of this! Go roll out another barrel to tap. We are already out. These ravenous sailors will drink us dry with their unending thirst. And, think about minding your manners with the wealthy man at the window table,” Mr. Couwenhoven scolded me as he glared in the man’s direction.

The tavern was humming with activity, encased in a cloud of smoke and overflowing with not only beer but also boisterous laughter that night.

I’d rebuffed a lecherous traveler again. My mistake was that he was a repeat customer and one who had a little wealth to spread around.

“What shall I do? Let the letch grab me? You ask too much of me,” I retorted. “Certainly, you understand I must protect myself against some of these animals,” I emphasized.

Mr. Van Couwenhoven was a hideous man, only thinking of his coin.

“Listen to me quite well, you little Walloon,” he retorted as his chubby face reddened with anger. “I’m giving you a chance to have a living, but you will end mine if you are not a little more lenient with my good customers! I don’t care if you unleash that sharp tongue of yours with the foolish rogue sailors who are too drunk to remember what you say, but you will not chase away my better clientele. You understand me? Be polite!” he yelled.

I looked at Van Couwenhoven’s son, Pieter, nodding as he raised his eyebrows at me, motioning to the back.

“Yes. For you, I can be ever so lenient,” I said under my breath, staring into Pieter’s bright blue eyes.

My heart raced a little at the chance to meet Pieter in the back. It was hard for me to take my eyes off his handsome cherub-like face, a face that hid the personality of a little rascal.

Mr. Van Couwenhoven ordered me to the storeroom one more time, not wanting to lose business.

“Marie, I said to go get another barrel of beer from the back. Do as I say!” Mr. Van Couwenhoven ordered me.

As mad as he was, he still liked me. It was worse when his wife was around too. The husband was greedy but only resented me if I got in the way of profits. His wife was another story. I knew she’d despise me once she got wind of my budding romance with her son. 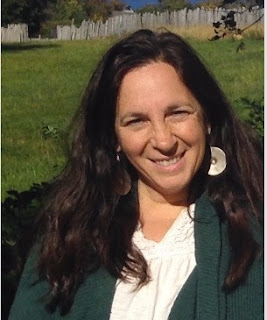 Award-winning author, Beth M. Caruso, is passionate to discover and convey important and interesting stories of women from earlier times. She recently won the literary prize in Genre Fiction (2020) from IPNE (Independent Publishers of New England) for her most recent novel The Salty Rose: Alchemists, Witches & A Tapper In New Amsterdam (2019). The Salty Rose is Beth’s second historical novel and explores alchemy in early colonial times, an insider’s view of the takeover of the Dutch colony of New Netherland, and the Hartford Witch Panic with information she gathered from previous and ongoing research. Beth’s first historical novel is One of Windsor: The Untold Story of America’s First Witch Hanging (2015), a novel that tells the tale of Alice ‘Alse’ Young and the beginnings of the colonial witch trials. She based the story on original research she did by exploring early primary sources such as early Windsor land records, vital statistics, and other documents.

She lives in Connecticut with her family. Beth uses kayaks and gardens to unwind.

i.e. where you found the idea, its symbolism, its meaning, who you dedicated it to, what made you want to write it?

The character of Marie du Trieux came about through the genealogical discovery of one of my husband’s ancestors in the early Dutch colony of New Netherland. Marie was a living person who stood out like florescent paint from the worn pages of research records. These documents point to a woman who had several run-ins with the law in regards to her tavern and liquor license. Marie had no problem selling liquor to Native Americans, on Sundays, or after dedicated hours. These events eventually led to her banishment. However, she returned to New Amsterdam after it changed from Dutch to British hands and became New York City.

I’m humbled that Marie still lives on through her offspring nine generations forward—my sons, River and Sky. I see in them Marie’s rebelliousness, independence, and compassion. The Salty Rose brings to life Marie and the early colonial struggles she faced with perseverance, individuality, and courage.

Thus far, regional historical events from early colonial America and genealogy. More specifically, investigation of the Connecticut Witch Trials and discovering Marie du Trieux in my husband’s family tree. My current work in progress is also inspired by my own family history and depicts the jolting story of a kidnapping that took place in the early twentieth century in a Sicilian immigrant family.

It was more difficult because of the complexity of The Salty Rose project. It required pulling together the historical details describing the culture and customs of two distinct colonial empires—the English colonies of New England and the Dutch colony of New Netherland. I also pieced together the personal historical timelines of each character based on the real person they represented. All of these components needed to fuse together seamlessly to maintain an accurate historical representation. With all this in mind, I then created fuller character profiles and used literary inventions to complete the story.

I’ve always loved history, facts, and research, so I love to write historical fiction. However, there are also elements of magical realism in my books which reflect a deeper spirituality. I’m also drawn to the paranormal and have an outline for a ghost story that is still in its development stages.

Give us a picture of where you write.(where you compose these words…is it Starbucks, a den, a garden…we want to know your inner sanctum?)? Where is your favorite place to write?

I write in a room surrounded by photographs of loved ones. This personal study overlooks a beautiful natural scene of a meandering river. I write on an early nineteenth century writing table that’s pretty beat up. It subtly reminds me of entering into the past—a great prompt for any historical fiction writer. Sometimes, I sit down and write on my deck that has the same view. Writing sessions come at any time, day or night, when I feel the urge to create.

It all started when my neighbor told me that the first witch-hanging victim in the American colonies (forty-five years before the Salem Witch Trials) was from our town, Windsor, Connecticut. Shocked and amazed that most people had never heard of Alice Young, I was determined to find out more and possibly put it into a story. I wasn’t sure that there would be enough information for a book, but as the research unfolded, it was truly one of the most fascinating stories that I’d ever come across. It had connections to both the Salem Witch Trials as well as later Connecticut witchcraft accusations. I had to write it at that point. There was no turning back! Much of what I discovered evolved into a remarkable narrative that became my first book, One of Windsor: The Untold Story of America’s First Witch Hanging. The Salty Rose continues telling the story of some of the Connecticut witch trial victims and the aftermath for some of the characters from One of Windsor. It also tells of the secret motives behind the takeover of New Netherland by the English.

Thank you to Our Town Book Reviews for giving me the opportunity to tell you more about The Salty Rose: Alchemists, Witches & A Tapper In New Amsterdam.