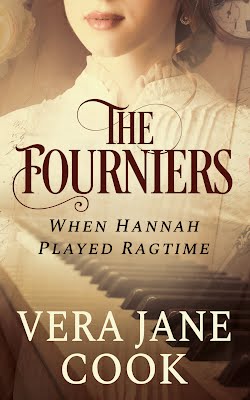 A story told against the backdrop of the Depression, Hannah struggles with anguish and despair highlighted by brief moments of triumph, lost love returned, deep friendship and the cruelty of laws so unfavorable to women.

As Vera Jane Cook, she often explores her southern roots and complex family dynamics in her women's fiction. Her novel Dancing Backward in Paradise won the Indie Excellence Award for notable new fiction when it was first released in 2007 and an Eric Hoffer Award for publishing excellence that same year. Dancing Backward in Paradise received a five-star review from ForeWord Clarion. The Story of Sassy Sweetwater, first released in 2012, was a finalist for the ForeWord Clarion Book of the Year Award. Additionally, Jane has published the southern fiction novels Where the Wildflowers Grow and Pleasant Day. Her newest women's fiction novel, When Hannah Played Ragtime, Book One in a family trilogy will be published this year.

Jane lives on the Upper West Side of Manhattan with her spouse, her Dachshund, Karly, her Chihuahua, Peanut, and her two pussycats, Sassy and Sweetie Pie.