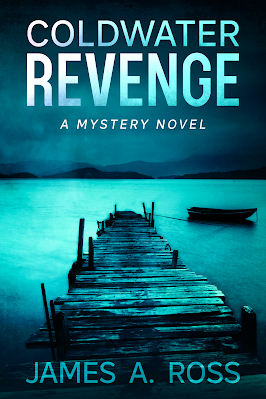 COLDWATER REVENGE is the story of two brothers involved with the same woman, and the ensuing crisis when one brother begins to suspect the other of helping her cover up a murder.

The tiny voice that sometimes appears when you’re about to do something stupid, hissed at Tom to be thankful, sit still and keep his mouth shut. Instead, he braced himself on the underwater rock, gathered breath and shouted.

“Yo!” His throat was raw and his lungs shredded, but he continued to bellow. “Eat shit and die, asshole!” Tom struggled to his feet and staggered noisily through the shin-deep shallows. The spotlight from the patrol boat leapt toward the sound. As the boat drew nearer, he dropped and rolled to his back, as if he were afloat in deep water. The twin Sea Witch outboards roared and the thirty-foot cruiser leapt through a cone of halogen light. Tom lifted his one good arm and waved. The battered cruiser hydroplaned erratically through the water like a wounded shark. The bow-mounted spotlight bounced above and around its target, losing and then finding it again. Tom could see the man’s face in the halo of light—cadaverous and grim. He could see his eyes, mad and murderous. The little voice screamed at Tom to be quiet and lie still. He crouched in the shallow water, extended his arm and raised a finger.

James A. Ross has at various times been a Peace Corps Volunteer, a CBS News Producer in the Congo, a Congressional Staffer and a Wall Street Lawyer. His short fiction has appeared in numerous literary publications and his short story, Aux Secours, was recently nominated for a Pushcart prize.