If You Can’t Stand the Heat -- Camille Anthony: In human shape or his natural prairie dog form, Edison was normally the most laid-back of males, except when his mate, Reba, crossed the line… 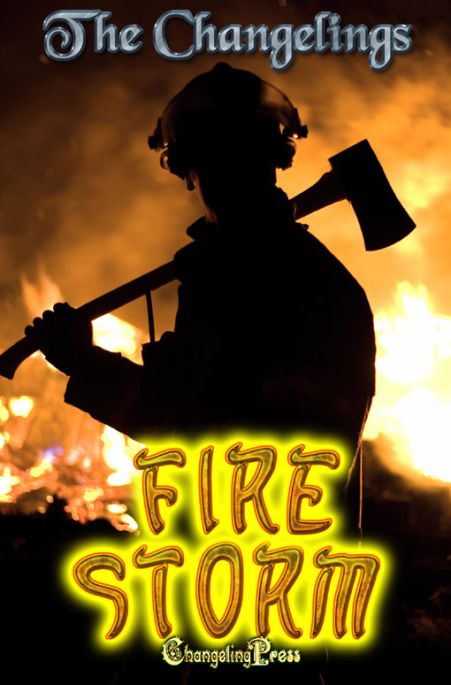 Brimstone by Mistake -- Alice Gaines: Heaven’s made a mistake. What will Lucifer do when the Man Upstairs wants Sally back?

Shifting Priorities -- Anne Kane: When the sexy hunk Jexx picks up in the station bar turns out to be more than human, she has more to worry about than her profit margin.

Burning Down the House -- Isabella Jordan: Will Katurah use her powers now to end it all -- or will she give in to a fiery lover?

Britta’s Beast -- Kate Hill: When Max and Britta met at a convention for members of magical law enforcement, they seemed like a perfect fit…

If You Can’t Stand the Heat by Camille Anthony

He stood in the doorway of the Bakery’s kitchen, belt dangling from his hand, watching his mate of forty years bustle about preparing refreshments for the library shindig about later that evening. As always, the sight of her had his heart doing that funny leap in his chest, his cock echoing the movement behind the zipper of his jeans. After all this time, it still only took a look, a whiff of his female’s scent to have him hard as a cactus spike.

Along with his surging lust came a powerful burst of love and he knew if prairie dogs didn’t mate for life, he’d still never let this woman go. He’d die without her. However, that didn’t mean he was blind to her faults.

His Reba was an incorrigible busybody, continually putting her finger in other folk’s pies. He understood her interfering tendencies were part of her caring nature and that would have been fine as long as she contained her meddling within the family.

He wasn’t mad at her. Edison’s smile was full of masculine anticipation. The punishment of her infraction was going to be intensely pleasurable for both of them.

Heat from the tray of kitchen-sink cookies radiated through her oven mitts as Reba pushed the door of the oven closed with a bump of her plump behind. Humming, she carried her burden to the cooling racks and began sliding this last batch off the pan onto the wire trays. Inhaling deeply, loving the smells of fresh baking that meant home to her, the buxom baker couldn’t help smiling. She loved the holidays. All of them, but this season, Reba had plenty to celebrate.

For the first time in years, all her children would be coming home to Barkus. Even better, Puppy -- the younger brother who was like another son since she’d raised him from the time their parents died in a car accident -- would be introducing his new mate to the family. Reba sighed happily, making a mental note to look up information on the Kwanzaa rituals as Carly was Afro-American. She didn’t want the newest member of the pack to feel slighted.

Startled, Reba jumped, the last cookie flying off her spatula to explode into warm gooey crumbs on the stainless steel counter. She turned toward the door and her mate, ready to blast him for sneaking up on her, only to jerk to a halt, heart skidding around inside her chest until it came to rest in the pit of her belly at the sight of her broad shouldered mate -- brown eyes alight with mayhem -- brandishing his wide leather belt.

Hot damn, I’m about to get spanked.

“Edison, what are you doing here in the middle of the afternoon? I thought you were at the bar, hanging with all your old coots.” She was proud her voice didn’t shake.

She knew exactly what that old dawg was upset about and she wasn’t a bit ashamed of what she’d done. Huffing, she folded her arms over her full chest. Her tone was belligerent. “Served him right. He had no business trying to back out of his promise to Carly.”

Edison sighed. “And you had no business sharing something I told you in confidence.”

The glint in his eyes belied the sorrowful expression on his face and Reba shivered, knowing what was coming before Edison got the words out his mouth. “Well, you’ve asked for this.” He gestured toward the door leading to the next room. “March yourself into the pantry while I go flip the open sign and lock the door.” He headed out the kitchen but paused to turn and spear her with a warning glare. “If you’re not ready when I get back, I’ll be adding to your punishment.”