Tales from Cloud Canyon is a series of character driven, topical short stories celebrating the everyday child, doing everyday things, with their everyday abilities designed for children aged 3+.  Developed by a research psychologist and mom of 3, these stories were developed to be entertaining, educational, and celebrate the power of the everyday within our the beautiful, diverse world.

This Kickstarter collection features three topical short stories from the Cloud Canyon Universe: Here, There, & Everywhere, The Secret to Success, and Invisible Friends. Each of these titles are fully illustrated from artist Randall Hampton and are about 25 pages long.

THE SCIENCE BEHIND THE WRITING
The fictional characters in childhood stories are some of our earliest teachers. We learn a range of things through the observation of these symbolic models, such as what is right and wrong, a desirable and undesirable behavior, gender roles, norms, stereotypes, and more. The role of models is particularly influential in childhood as it can have a long lasting impact on development.

Each story in this collection was developed to not only be entertaining but educational as well, with the stories' characters modeling a range of age-appropriate skills spanning four areas of human development: intellectual, social, emotional, and moral. The skills that are modeled within any particular story are displayed on the back cover of each book and explained in more detail on the last page of the book. 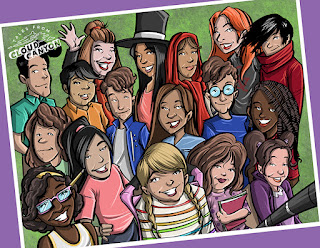 DIVERSITY, REPRESENTATION & INCLUSION
Tales from Cloud Canyon changes the narrative by reflecting and celebrating the beautiful and diverse reality of our world. The characters within the Cloud Canyon  Universe were developed to represent a range of shapes, sizes, abilities and disabilities, and traditional and non-traditional families.

It was also equally important that these details were not the central theme of the stories themselves as our shape, level of ability, and what our family unit looks like are just some of the many parts of who we are and not necessarily the defining feature of our stories.


PRODUCTION AND RELEASE
All of the stories have been written and are currently being brought to life through the illustrative magic of Randall Hampton. The physical production of the books is expected to start in June 2022. Time from production to shipping is about 6 - 8 weeks (+/- 2-4 additional weeks due to COVID delays). Once Rachel receives the books, they will be shipped to backers. There is an expected arrival date of the books no later than November 2022.

Here, There, & Everywhere Is the story of Eli and Ophelia. Ophelia notices Eli isn’t at school one day only to find he is at home mourning the loss of his grandmother. This is a story about death, dying, and grief told in a child appropriate way from a faith-agnostic perspective. Meaning, it would be just as appropriate in a religious home as it would be in a non religious home.

“First we are kids, then grown ups, then wrinkly and old,

And life is a cycle that way, so I’ve been told.”

Eli paused and looked back up at his friend,

“But what about after? What happens in the end?”

“Well, that is a really big, difficult question,

There are a lot of ideas, superstition.

Some say you go up in to Heaven in the sky,

And reunite with everyone who passed you by.

Others say you come back here as something different,

A bird or butterfly, something significant.”

“But whatever happens, a part of them stays here,

Inside of all the people they’ve met and held dear.

We hold pieces of everyone we’ve loved, embraced,

Those who are still here and those in a different place.”

“Though she’s not here, your grandma is a part of you,

Who you are and the things that you think, say, and do.

The way your hair springs up, your encouraging gaze.

Those are just two of the many possible ways.

So really you two will always be together,

In your heart and your mind, today and forever.” 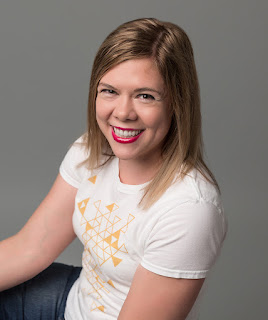 Dr. Rachel Kowert is a research psychologist, award-winning author and mom of three. In 2019, she launched her first Kickstarter project from the Cloud Canyon universe. It was a collection of female centered stories entitled Pragmatic Princess: 26 stories of self sufficiency and raised more than $25,000 in 30 days and won an INDIES award for educational children's picture book.

about the illustrator, Randall Hampton...

Randall Hampton is an author, illustrator, husband and father of 3.  He is the Creator of "The Little Game Master" series of books and considers himself a story teller above all else. When he is not spending time with family and friends, Randall enjoys reading, video games, music, and table top games of all sorts.

more personal "stuff" about the author...

The initial ideas behind Tales from Cloud Canyon came to me in 2019 when my daughter was 4 years old. I was lucky enough to pick up about a hundred different paperback books at a garage sale of a former teacher and had started reading her a new book every night before bed. After a few weeks of this, I started to notice a theme: there were very few books with female protagonists and when there were, they were pigeonholed into a damsel in distress or only successfully navigated their challenges with the use of superpowers. While there is nothing wrong with a female superhero or a knight in shining armor, I wanted something different.

After a bit of digging I realized there was a dramatic lack of representation in children’s literature. The Nielson 2018 book scan report found that of the top 100 best selling children’s books, 1 in 5 did not feature a single female character, only 2 out of the top 100 featured a black, asian, or minority ethnic character in a central role ( with 70% of the black, asian, or ethnic characters were in non-speaking roles) and only 1 out of the top 100 featured a disabled child but they did not speak or have a key role.

Fueled with discontent, I called my friend who runs a small micropress and told her she needed to write or commission some books with strong female characters at the heart of them. She told me I should write them. At the time, this made me audibly laugh! However, after sitting with her words and fueled by her encouragement, I decided to open up my notes section in my phone and give it a try. In less than two weeks I had written what ended up becoming the first collection in the Tales from Cloud Canyon Universe: the 26 stories of Pragmatic Princess. In 2019, I successfully kickstarted these stories as the collection Pragmatic Princess: 26 Superb Stories of Self-Sufficiency and raised more than $25,000 in 30 days and earned an INDIES award for educational children’s picture books.  So I guess I can write children’s books.

Over the last few years, I have continued to write and expand the Cloud Canyon universe and am excited to announce that I am launching a second Kickstarter June 4 for a BRAND NEW collection of three topical short stories: Here, There, & Everywhere, Invisible Friends, and The Secret to Success. These stories are the ones that I felt were still missing from my children’s library. And while these new stories do feature some new male characters, strong female leads are still at the center.

I also want every child to be able to see themselves as the hero of their own story. And disproportionately, this is a rare occurrence for female characters, particularly females characters from traditionally marginalized backgrounds. When children grow up not seeing themselves reflected in the media they consume, they grow up feeling like they don’t matter. So within the Cloud Canyon universe more than half of the characters are female, more than half come from a minority background, and 1 in 10 have visible disabilities. It was equally important that these details were not the central theme of the stories themselves as our shape, level of ability, and what our family unit looks like are just some of the many parts of who we are and not necessarily the defining feature of our stories.

My goal with Tales from Cloud Canyon is to change the status quo around children’s literature and let children know that they are the heroes of their own story, no matter their gender, ability or background. I want all children to have the opportunity to celebrate the power of the everyday through the magic of storytelling… and maybe learn a thing or two along the way.

Many storylines also come from my own experiences or those of my friends and family. For example, Invisible Friends was motivated by my 7 year old speaking to strangers online and trying to navigate those conversations as a parent. The Secret to Success was inspired by my own difficulties I experienced learning to ski when I moved to Canada.

I find that some of the short stories flow more quickly or naturally than others, particularly those that are loosely based around my own personal experience.

During the day, I am a research director for a mental health non-profit. A research psychologist by trade, scientific writing is my bread and butter. I spend most of my time and energy writing scientific articles and books which is in stark contrast to the creative writing of Cloud Canyon!

Most of my writing happens on the notes app on my phone when inspiration strikes! On my living room couch as I watch my 1 year old play on the floor. In the school pick up line while I’m waiting for my older children. Hovering over my nightstand right before I go to bed.

I told this story in the initial question, but yes! My own discontent with the current state of children’s literature is what fueled me to take my creative musings from my own mind and create something tangible to share with the world.  I wanted to create a world where the everyday child is celebrated for doing everyday things, with their everyday abilities. A world where mistakes are learned from, diversity is celebrated, and every child gets to be the hero of their own story.  Cloud Canyon is that world.