This post is part of a virtual book tour organized by Goddess Fish Promotions. Kris Bock will be awarding Ebook copies of the first four books in the Accidental Detective Series - Something Shady at Sunshine Haven and Something Deadly on Desert Drive (out now), plus early copies of books 3 and 4, Someone Cruel in Coyote Creek (not available publicly until September 29, 2022) and Someone Missing from Malapais Mountain (not available publicly until February 28, 2023) - to a randomly drawn winner via rafflecopter during the tour. Click on the tour banner to see the other stops on the tour.

The Accidental Detective book 1: Something Shady at Sunshine Haven

Injured in a bombing, Kate returns to her hometown in Arizona with new scars, a limp, and pain meds that give her brain fog. For the first time in her life, she's starting to feel her age (49), even though she's living like a teenager again: staying with her father, trying to understand why her sister resents her so much, and running into old friends who still think of her as Kitty. 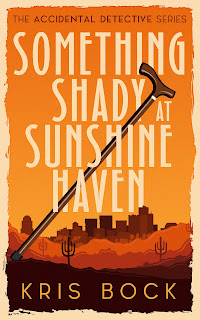 Seeing her mother in an Alzheimer's unit is the hardest part – until an old friend asks her to investigate suspicious deaths at that nursing home. Is a self-appointed "Angel of Mercy" killing patients to end their suffering? Are family members hastening their inheritance? Is an employee extorting money and killing the witnesses? Kate uses her journalism skills to track clues, but the puzzle pieces simply won't fit. If Kate can't uncover the truth, her mother could be next on the killer's list.

Kate has followed the most dangerous news stories around the world. But can she survive going home?

A fun mystery with a few quirky characters. Kate, formerly a war correspondent, comes home to heal after an accident and possibly to heal her family and help with their needs.

Although I have never read another of Kris Bock’s books, it looks as if this is possibly her first series combining mystery and humor. I know from experience that in dealing with an Alzheimer’s patient one must often be able to experience a little humor. She’s done a good job making this a true mystery with a little lightness to make it an enjoyable read.  Kris Bock has several books published. All have good reviews. Check them out here:  https://amzn.to/3OiACCr 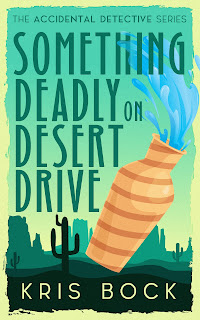 The Accidental Detective book 2: Something Deadly on Desert Drive

Starting over at fifty might be hard, but it shouldn’t be deadly…

Still recovering from an injury that might have permanently derailed her career as an international war correspondent, Kate Tessler is living in her childhood bedroom and pondering her second act when another case lands in her lap. Kate’s father and his coffee group are worried. Their friend Larry married a younger woman who now insists he has dementia and won’t let any of his friends visit. They’re convinced that Larry’s wife and her two adult, dead-beat kids are out to steal his money. Can Kate help?

Soon Kate and her unusual gang of sidekicks are unofficially, officially investigating. But before they can dig out the truth, a murder raises the stakes. Now they need to prove Larry is both mentally competent and not a killer. They’ll have to find the real murderer—without risking their own lives in the process.

“I had such a lovely day reading your story. I could barely put it down. I am still in awe of how you manage to wrangle these three generations of sleuths without every going over the top or relying on stereotypes or cliches, and of course watching Kate start to come to terms both with her disability and potential inability to ever fully heal as well as her new life, aging, being back home again and reconnecting with her family—all while solving two crimes—definite multi-tasker! The story was so engaging and quite clever.” – Sinclair Jayne, author

Read an Excerpt from Something Shady at Sunshine Haven

I put a hand on Tommy’s wheelchair and leaned down. “I’ll tell you all about it sometime, if I can. But for now, please pretend we’ve only been chatting about times long past.”

Mendelson joined us, his hands on his hips. “Miss Tessler, I see you’re here again. I hope you aren’t bothering the residents with your questions.”

“I prefer Ms. Tessler, and I was having a lovely chat with a very interesting man.”

I spotted Mrs. Gregorian and her family. I’d probably learned all I could from them about Mrs. Gregorian’s illness and recovery, but if Mrs. Gregorian was one of the overmedicated patients, that opened up a new line of questioning.

And another thing: Mom had gotten worried about money shortly after seeing Mrs. Gregorian. Could that have been the neighbor she meant, the one who claimed she’d been asked for more money? Could “Mr. Brown—no, Mr. Rogers” actually be Mendelson, the memory care program coordinator? He’d been wearing a brown button-up sweater, so maybe that triggered Mom’s memory but sent it in the wrong direction.

I turned to Tommy. “It was lovely talking to you. I hope we’ll meet again when I’m here visiting my mother. I need to speak to some other new friends now.”

Mendelson scowled and shuffled his feet.

I grinned. “Have a great day.”

I felt his gaze on me as I turned to cross the room.

Between the residents, visiting family members, therapy dogs, and their handlers, the spacious room was a swirl of activity. I waited for a woman using a walker to cross in front of me. My leg ached, so I shifted more of my weight onto my good leg and the cane. A man to my right half turned, gesturing wildly with his arms while he told a story. I flinched back to avoid being hit.

Something slammed into my left leg. I grunted in pain as my leg collapsed. My cane swung upward, goosing the gesturing man and tangling in his legs.

The next thing I knew, I was sitting on the floor in a heap. 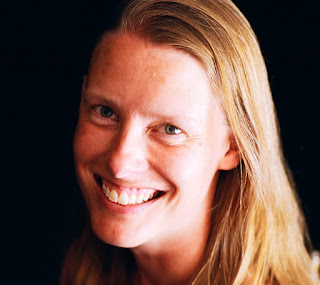 Kris Bock writes novels of mystery, suspense, and romance, many with outdoor adventures and Southwestern landscapes. Get a free Accidental Detective short story and bonus material when you sign up for her newsletter. You’ll also get a free 30-page sweet romance set in the world of the Furrever Friends cat café and a printable copy of the recipes mentioned in the cat café novels

Kris also writes a series with her brother, scriptwriter Douglas J Eboch, who wrote the original screenplay for the movie Sweet Home Alabama. Follow the crazy antics of Melanie, Jake, and their friends a decade before the events of the movie. Sign up for our romantic comedy newsletter and get Felony Melanie Destroys the Moonshiner’s Cabin. Or find the books on Amazon US or All E-book retailers

Where to buy Something Shady at Sunshine Haven

Buy links for Something Deadly on Desert Drive