The number one secret to my success as a bodyguard? Staying under the radar. But when a wildly public disaster and a dead client blew up my career and reputation, it turned my perfect, solo life upside down.

I thought my tiny hometown of Nowhere would be the ideal out-of-the-way refuge to wait out the media storm.

My little brother had moved into a treehouse. The obscure mountain town had decided to attract tourists with the world’s largest collection of big things... Yes, Nowhere now has the world’s largest pizza cutter. And lawn flamingo. And ball of yarn...

And then I stumbled over a dead body.

All the evidence points to my brother being the bad guy. I may have been out of his life for a while—okay, five years—but I know he’s no killer. Can I clear my brother before he becomes Nowhere’s next Big Fatality?

Murder mystery game included in the back of the book!

Talk about a fun and funny cozy mystery, this is it. I have now read several Kirsten Weiss books and each one is just as good as the other. This one is Book 1 in a new series titled A Big Murder Mystery Series. I haven’t read all of her many series, but I’ve read enough to say this a different theme. In fact she somehow manages to do that with every series. Must have a vivid imagination, don’t you think?

This time there are a lot more dead bodies (you have to have dead bodies in a mystery, right?). The mob is involved and the main character was a bodyguard. A fun mix in a well-written enjoyable cozy.

Check out Kirsten Weiss’ many books here: KirstenWeiss on Amazon

You won’t be disappointed.

My low heel caught on something, and I stumbled backward.

Normally, this wouldn’t have been an issue. I was fairly light on my feet. But a howling mass of gray fur flew around the corner of the building at the same moment. I threw up my hands to protect myself and thudded into something hard and muscular. 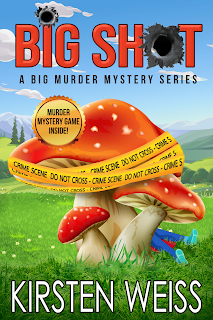 Powerful arms wrapped around my chest. And since my hands were protecting my face, the arms grabbed a very sensitive spot. Two sensitive spots, actually.

“Watch it,” a masculine voice rumbled.

I jerked away, and he released me. Embarrassed and indignant, I whirled and glared into a pair of green eyes full of mirth.

My gaze moved upward to his dark, curling hair. For the first time since the accident, I felt like I was in the real world. He was real.

He was also at least six-foot-two, because he was four inches taller than me. He looked like the Greek god of war—not the Ares from the marble statues, the one from that old TV show, Xena, Warrior Princess (my secret hero). The effect was in no way diminished by his white t-shirt and jeans stained at the knees.

“There are easier ways to get to know me,” he said. 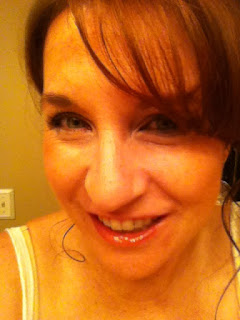 Kirsten Weiss writes laugh-out-loud, page-turning mysteries. Her heroines aren’t perfect, but they’re smart, they struggle, and they succeed. Kirsten writes in a house high on a hill in the Colorado woods and occasionally ventures out for wine and chocolate. Or for a visit to the local pie shop.

Kirsten is best known for her Wits’ End, Perfectly Proper Paranormal Museum, and Tea & Tarot cozy mystery books. So if you like funny, action-packed mysteries with complicated heroines, just turn the page…