This post is part of a virtual book tour organized by Goddess Fish Promotions. C.J. Carson will be awarding a $25 Amazon or B/N GC to a randomly drawn winner via rafflecopter during the tour. Click on the tour banner to see the other stops on the tour.

The paranormal mystery The Veils of Parallel Times continues with “Murderous Interruptions”. Allie Callahan’s nemesis is a challenging and formidable adversary. 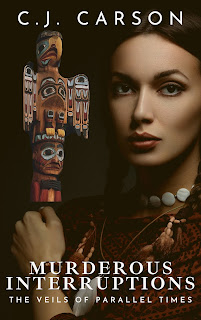 Travel with Allie as she finally accepts and embraces her ancestral gifts to stop her archenemy who would have her destroyed for his own lust of power. Explore the depths of her relationship with this rival in this life and beyond the veil.

When I turned from the fire to respond, the woman hushed me. “You have much work to do, my dear, now rest.” She held me in her arms, swallowing me up in the most comforting sleep I could remember for a very long time, maybe ever.

Hours later, the warm glare of the sun’s first light sliced through the trees of the forest, waking me from a sound sleep. The air was cool and crisp, and I was laying next to the fire that had burned down to smoldering coals. Suddenly, realizing I wasn’t dreaming, I was in unfamiliar surroundings. I remembered the woman I had met the evening before, but she was not within eyeshot. Glancing around to get my bearings, it was shocking to be sitting in the middle of a small clearing of the woods. Several teepees made of tall tree branches wrapped in animal skins sat along the edge of the clearing. Standing and sliding out from under the animal skin blanket, I looked down to see myself dressed in unfamiliar clothes, and leather moccasins covering my feet. I had the strange sensation I was in a familiar place, but still not where I belonged.

Before I took one step, I scanned the area. Then something compelled me to approach one of the dwellings. As I drew closer, an Indian brave stepped out. Grabbing me by the arm, he pulled me into the teepee and shoved me to the ground. Walking to the edge of the space, he retrieved a large round basket and shot it at me with such force I thought it might fray. Shocked, I gazed up at him, he looked oddly familiar, but it was his eyes that gave him away. These new experiences were teaching me that the eyes were indeed the window to the soul. Those dark brown eyes were those of a man I knew all too well. Makya! Could this be Makya? Had I known him through other lifetimes? Although he spoke in a different tongue, it somehow translated perfectly for me.

He was angry and started barking. “You are a lazy dreamer. Why you insist on leaving our dwelling and choose to lay with the fire in place of me is a mystery. You need to do your gathering, and you are late in starting your day. I am off to hunt. You will obey me and begin behaving like a squaw worthy of me.”

I heard footsteps outside as someone was approaching. “Calian, are you coming? We are late; the morning is half over.”

Stunned, my eyes widened. Makya? Although the man called him Calian, the spirit was too familiar. It was the evil spirit I’d come to know as Makya! It didn’t look like him, but it was his temperament.

“You know better. Do not use your powers on me. I will strike you down every time. You are no match for me!”

Panic rose in me as I struggled to understand what was happening. If this brave was indeed Makya by a different name, how did we get here?

Pushing through the opening in the structure, he paused without turning to me. “Do not return this afternoon unless you have filled that basket with berries and some healing herbs. You must learn your place and mind your responsibilities. Do not make me the laughingstock of this tribe one more time!”

I listened to his footsteps as he jogged off, mounted his horse, and rode away before I got up from the ground. 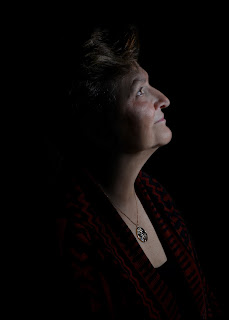 CJ Carson was inspired by a great story from a very early age. What brought her to this juncture in life and encouraged her to put pen to paper are the many rich experiences and opportunities of her life's journey.

While working in the medical field, she explored energy work and became a Polarity Therapist and Reiki Therapist.

Exploring acting brought her into the theatre world both on the stage and behind the scenes.

Painting introduced her to a group of artists that shared her passion for bringing a scene to canvas.

Her love of singing allowed her to travel twice to Europe as a soloist with conductor Sonja Dahlgren Prior, who inspired her to do something, she never dreamed possible.

CJ Carson has always wanted to write. Now she is introducing to the world her second published book, "Murderous Interruptions," from her trilogy, Veils of Parallel Times.