I'll Go the Length of Meself

"Guy's life was a living adventure: he was a mariner and navigator of the first order, a character with the bravery of a Viking and the kindness of Robin Hood. Generous to a fault, he could never turn his back on someone in need, and would risk his life in a flash to save the life of another. He was like a godfather to the coastal people.

"Guy Earle commanded ships when he was a boy. He had the qualities admired by Newfoundlanders, and created maximum employment in the family business wherever he could. He was truly a Newfoundland hero."

"Guy had a mind of his own. He was a terrific leader and he played hard to win at anything he did. He was quick to size up a situation and quick to take action. He never, ever accepted the word 'can't'; if it was possible, it had to be done."

"Skipper Guy could take charge on anything. He had no fear and believed in himself. He could make friends with the Queen, as they say, if he wanted, and get anything he wanted."

"It must be a beautiful thing to know you saved someone's life. Guy Earle saved me. I've had a long life, a successful business, and raised a family because of him. He was a great man."

"Guy Earle was the exemplification of courage in everything he did. His trade was with people and his warmth spread as widely as his countless business negotiations. He gave his life to his vision of the fishery; it was his gift to his homeland, a gift few men can claim to better."

"Guy Earle was sent here by God to give to people."

"Captain Guy was a daring seafarer whose legendary adventures rivalled those of the heroes in such Hollywood films as Captain Blood, Down to The Sea in Ships, and Captains Courageous."

"There will never be another Guy Earle; there couldn't be." 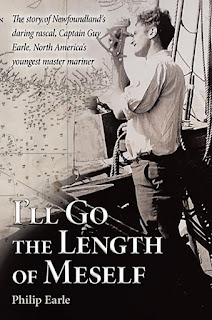 In the 1950s, the old Newfoundland train The Newfie Bullet was still going strong, running across the island and on a spur line around Conception Bay. The train ran on narrow gauge tracks, making for an unsteady ride. Coal was mainly used to power it, and later, diesel. The trains were slow, especially on uphill grades. Road crossings had large crosses mounted on posts to inform drivers of the tracks. At some busy intersections, an automatic mechanical arm lowered across the tracks so nothing could cross when a train was approaching. After the train passed, the arm would rise and vehicles could continue on. When the arm was down, it was three feet off the ground and parallel to it.

Skipper Guy and his friend, George Garland, were driving through Whitbourne one Saturday morning in 1955 and came to a railroad crossing with the arm down. A train could be heard blowing her whistle and was seen coming down the track towards them. The skipper looked at the bar across the road and then down the track at the train, assessing her speed. Then, with a squint in his eyes, he looked at George and said, “She can do it!”

The skipper responded with confidence. “There’s no such thing as can’t; I’ll bet you a case of beer she can!”

“You got a bet, Skipper!” and they shook hands on it.

The skipper backed up the car five hundred or six hundred feet, then took off at whatever the car could do towards the closed crossing. The black smoke from the train came closer and closer to the intersection. About twenty feet before the crossing—with the car doing eighty miles an hour—she dipped just before she hit a rise in the road. Everything went airborne—right across the front of the train—with all four tires off the ground. She cleared the bar without touching it. Four seconds later, she landed forty feet on the other side of the tracks just as the train was passing through behind them. The engineer was in a panic, with his head out the window and blowing the whistle, but the skipper kept going with a grin on his face and didn’t stop. George, who also liked driving fast, couldn’t believe it! They stopped at the first beer shop, and George went in and came back with a dozen beer, keeping his promise. On the way home, they both had a great time. Guy was proud of “hisself” for getting the free beer from his buddy. Every now and then, he’d say, “I’ll have another one, thank you.” All the while, George was still shaking his head, feeling the thrill of being airborne.

There was never a dull moment if you were around Skipper Guy. He was always looking for excitement and had his eye out for a stunt. He did these kinds of things every day of his life, with his friends and with strangers just to give them a thrill.

My father lived an exhilarating life. With I’ll Go the Length of Meself, my hope is to showcase his legacy as a great mariner, businessman, humanitarian, and exhibitionist, along with many other attributes. There will never be another Guy Earle, there couldn’t be. This is his story, and I’m proud to share it.

WEBSITE - "There will never be another Guy Earle; there couldn’t be." (gothelength.com)